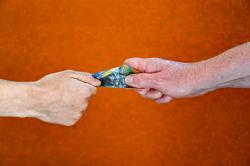 Who pays for compulsory superannuation? Employers write the cheque, but economists have long assumed that workers ultimately pay the cost. The economic incidence of compulsory super is an empirical question, and empirical evidence has been scarce until now.

Using administrative data on all workplace agreements ever registered in the federal industrial relations system, Matt Cowgill and colleagues found that, on average, workers bear about 80 per cent of the cost of super increases over the life of an enterprise agreement. These findings were contained in a Grattan Institute report No free lunch: higher super means lower wages, released earlier this year.

Matt Cowgill is a Senior Associate at Grattan Institute, working in the Household Finances program. Matt joined the Grattan Institute in July 2018. He previously spent three years as a Chief Technical Adviser for the International Labour Organization, before which he worked as an economist for the Australian Council of Trade Unions and in government and the not-for-profit sector.  Matt has a Masters in Economic Policy from the University of London, as well as a Bachelor of Economics and a Bachelor of Arts (Honours) from the University of Western Australia.