The Future of the History of Economics in Australia - ONLINE ONLY 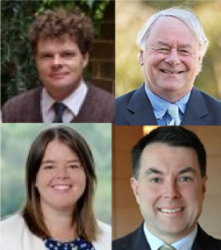 You are invited to join us for this webinar.

Australian economics degrees in past decades have included history of economics courses taught at a high level, for instance the famous Economic Classicscourse taken by the honours students at University of Sydney, many of whom have gone on to positions of influence in profession. Australia also has disproportionate research strength in the field. It has contributed to the diversity and innovative character of Australian economic thinking, especially in macroeconomics, labour economics, and international economics.

However the future of research and teaching history of economics in Australia is under threat.  Courses being eliminated despite strong student interest, PhDs training is declining, economics departments are not replacing retiring historians of economics, and the Centre for the Study of the History of Economics at University of Sydney has lapsed after the leaving the discipline without a focus for research and postgraduate supervision within a major Australian.

Professor Paul Oslington works mostly on the history of economics, especially relationships between economic and religious thought.  He completed his PhD in econometrics at University of Sydney and DTheol through University of Divinity.  He is a member of the Economic Society of Australia (NSW) Council and former Vice-President.

Claire completed her PhD at University of Wollongong in the history of economics, and writes on networks, intellectual communities and knowledge creation. Her current research is on interlocking directorships in Australian corporations.

Lodewijks, John (2004). "HOPE in the Antipodes" in History and Political Economy: Essays in Honour of P. D. Groenewegen,edited by A. Aspromourgos and J. Lodewijks. London Routledge: 245-55.

Lodewijks, John (2014). “The History of Economics ‘Down-Under’: Repulsing the Barbarians at the Gate.” in Reclaiming Pluralism: Role of History of Economic Thought in Heterodoxy - Essays in Honour of John E. King;edited by J. Courvisanos, J. Doughney and A. Millmow. London, Routledge.

Viner, Jacob (1950). A Modest Proposal for Some Stress on Scholarship in Graduate Training Address before the Graduate Convocation, Brown University, June 3, 1950. Reprinted in The Long View and the Short  and Essays on the Intellectual History of Economics edited by Douglas Irwin

Economic Society of Australia     Please join if you are not already a member. https://esacentral.org.au/content/403/membership

Institute for New Economic Thinking (INET) is investing in renewing the field in the US. https://www.ineteconomics.org/education/materials/history-of-economic-thought-website

Registration and Joining the Webinar