Policy in the Pub: Brexit, Trade, and the WTO 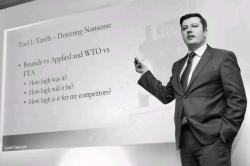 Brexit, Trade, and the WTO

A central assumption of economics - that freer trade is a unanimous good – is now being challenged. Policymakers around the world are navigating the issues posed by power struggles with other countries and, in some cases, their own constituents on the benefits of freer movement of goods and services.

The United Kingdom will have just had its election, which some have seen as a deciding vote on Brexit, and China-US relations are deteriorating, as an excessive focus by the US on its bilateral trade deficit with China threatens to derail decades of trade between the two countries. Against this backdrop, the WTO and other international organisations appear toothless.

Where do we go from here and what are the prospects for freer trade in the future? And how should economists and other policymakers approach these important and fundamental questions?

The Economic Society in collaboration with the ESA Young Professionals is delighted to present this policy in the pub session with Dmitry Grozoubinski – founder of Explain Trade and former Australian Department of Foreign Affairs and Trade and WTO negotiator.

Dmitry Grozoubinski, is a negotiations and trade policy expert, specialised in accessibly communicating these complex worlds in a way that's relevant to businesses, officials and the general public. Prior to launching ExplainTrade.com and joining the University of Strathclyde's Faculty of Law as a Visiting Professor, Dmitry served as an Australian diplomat and trade negotiator at the World Trade Organisation. He has negotiated complex trade agreements in Geneva, at WTO Ministerial Conferences and UN Conferences in Kenya and as part of FTA negotiating teams. He has trained the next wave of the United Kingdom's trade negotiators (UK civil servants), testified to the House of Commons, and his trade commentary has been cited in the New York Times, Economist and on the BBC. He has served a lecturer and tutor at the Monash Graduate School of Business. Dmitry lives in Geneva (Switzerland). He holds a BA in Political Science from the University of Melbourne and a Masters of Diplomacy and Trade from the Graduate School of Business at Monash University.