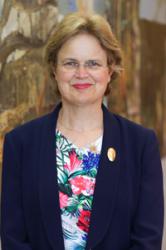 The 2019 Stan Kelly Lecture will be given by Frances Adamson, Secretary of the Department of Affairs & Trade.

Frances Adamson has led the Department of Foreign Affairs and Trade as Secretary since 25 August 2016.

Prior to her appointment as Secretary, Ms Adamson was International Adviser to the Prime Minister the Hon Malcolm Turnbull MP from November 2015.

From 2011 to 2015, Ms Adamson was Ambassador to the People's Republic of China.  She served in the Australian Consulate-General in Hong Kong in the late 1980s during the early years of China's reform and opening.  From 2001 to 2005, she was seconded as Representative to the Australian Commerce and Industry Office in Taipei.

Ms Adamson has twice served in the Australian High Commission in London, as Deputy High Commissioner from 2005 to 2008 and as Political Counsellor from 1993 to 1997.

Ms Adamson is President of the Institute of Public Administration Australia ACT Division. She is a member of the Export Finance Australia Board, the Advisory Board of the Australian National University's National Security College and the Asia Society Australia Advisory Council.  Ms Adamson is a Special Adviser to the Male Champions of Change and a member of Chief Executive Women.  She was awarded a Sir James Wolfensohn Public Service Scholarship in 2015.

Ms Adamson has a Bachelor of Economics from the University of Adelaide and was a recipient of a 2014 Distinguished Alumni Award.  She joined the then Department of Foreign Affairs in 1985.

She is married with four children.

About the Stan Kelly Lecture

The Stan Kelly Memorial Lecture was established by the 'modest member' Bert Kelly, in honour of Bert's father Stan. William Stanley Kelly was a member of the Commonwealth Tariff Board from 1929 to 1939, an advisor to the Commonwealth Prices Commissioner from 1942 to 1948, chaired the Joint Industry Advisory Authority from 1951 to 1953 and was a member of the Consultative Committee on Import Policy from 1952 to 1960. Because of his rural interests, he was long interested in reducing tariffs which he saw as an indirect tax on rural producers. He was a lifelong champion of free trade. The Lecture is held every two years, and is one of the Economic Society of Australia’s most prestigious events.