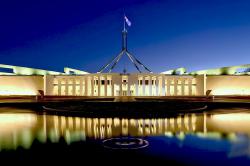 Please join Women in Economics and the Commonwealth Treasury for a panel discussion on the 2019 budget. Our panellists – Shannon Kenna (Commonwealth Treasury),  Michelle Dowdell (Commonwealth Treasury), Angela Jackson (Equity Economics) and Danielle Wood (Grattan Institute) – will take a comprehensive look at the budget and its implications. Enjoy a drink while our panellists tackle the big questions: What are the economic forecasts (and how does Treasury produce them)? Will the budget finally get to surplus and does it matter? How big are the pre-election giveaways? And what will be the impact of the budget on young people and women?

We look forward to seeing you for a fascinating discussion.

Shannon Kenna is an experienced communications professional, specialising in strategic communications for the public sector. She joined the Treasury in 2015 to manage a major government advertising campaign and has worked on the delivery of five Federal Budgets. As the Division Head of Communications and Parliamentary for Treasury she manages a broad program of work, including oversight of media relations, social media, stakeholder engagement, corporate communications, speechwriting, graphic design, publications and Treasury’s digital strategy.

Since beginning her public sector career at the Department of Immigration in 1994, Shannon’s career has spanned several agencies and diverse roles in communication and program management. Shannon has also worked in the private sector in Australia and the United Kingdom.

Shannon holds a Bachelor of Communication (Public Relations) degree, majoring in Management, from the University of Canberra.

Starting her career as an economist at the Department of Prime Minister and Cabinet under John Howard’s Prime Ministership, Angela has worked across tax, fiscal and social policy. As the then Finance Minister Lindsay Tanner’s Deputy Chief of Staff, Angela worked on the Government’s response to the Global Financial Crisis and major reforms across the health, education and disability sectors.

Currently a Senior Economic Consultant at Equity Economics, Angela is completing a PhD in health economics at the Monash University. Angela is also a non-executive Board Member and Finance Committee Chair of Melbourne Health, which runs Royal Melbourne Hospital, and has recently joined the Victorian National Heart Foundation Advisory Board.

An annual contributor to the National Foundation of Australian Women’s Gender Lens on the Budget, Angela is passionate about ensuring that women’s voices are heard in the economic debates facing our country.

As a veteran of seven Commonwealth Budgets, Angela brings an intimate understanding to the pre-budget discussion from the point of view of Governments that form them and the Oppositions that try to re-define them.

Danielle is the Budget Policy and Institutional Reform Program Director at the Grattan Institute. Danielle’s main research interests are tax and budget policy, intergenerational inequality and economic and political institutions.

Danielle previously worked as Principal Economist and Mergers Director at the ACCC, Senior Consultant at NERA Economic Consulting, and as a Senior Research Economist at the Productivity Commission.

Danielle is the National Chair of the Women in Economics Network and she sits on the Central Council for the Economic Society of Australia.

Drinks and canapes will be provided. Drinks and networking will start at 5:30pm, with the panel discussion to commence at 6:15pm sharp.

Both men and women are welcome to attend. Attendance is free but registrations are essential.